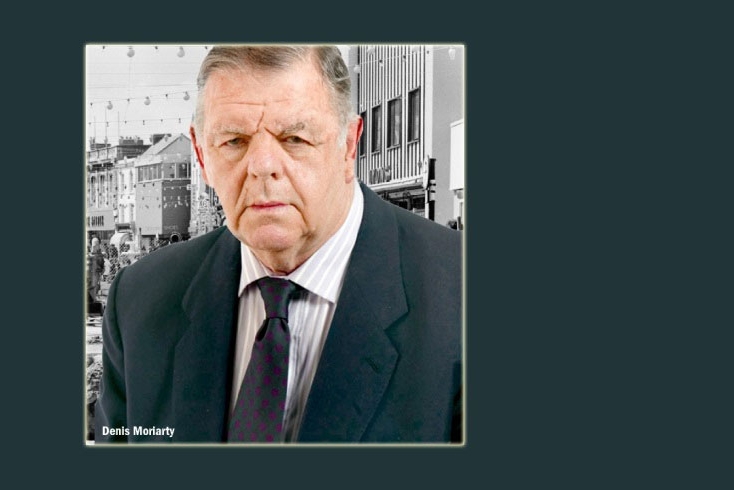 Article by Gordon Revington for the Kerry's Eye

He was home again for lunch and at three o'clock, having made a few calls to arrange the work schedule for the following Monday, he lay down and quietly went to meet his maker, with his wife of 48 years, Eileen and his youngest daughter Margaret close by.

It was typical of this big man who achieved so much in his lifetime by pursuing his own approach, to slip away with the minimum of fuss.

Despite growing the company and subcontractor staff to 130 and with a strong management team right up his last day, Denis took a keen interest in the business and was always available to provide his wisdom and experience.

Denis was born in 1936 in Ballintarman, Annascaul, and grew up on the family farm with his parents Jack Moriarty and Margaret Hickson, his brother Jackie and sister Margaret.

From an early age, he expressed a strong interest in machinery and tractors and this interest found direction when he established the plant hire business, an enterprise that continues to thrive today.

Denis married Eileen Griffin in 1964 and moved into a new home at The Kerries outside Tralee.

It was here that the couple's six children - Sheila, Aileen, John, Denis, Maurice and Margaret - were brought up and it was from here that he developed and grew the business.

The foundation of the civil engineering section in 1975 instigated a period of significant growth for the Denis Moriarty group of companies and the Tralee Flood Relief contract was a particularly significant one for the new division.

Sewage and water schemes in Kenmare, Waterville, Killarney, Ballyheigue, Tipperary and other locations around Ireland were also undertaken.

A major reconstruction of the pier in Dingle in 1990 was followed by a series of contracts to erect outlets for the McDonald's restaurants in 1995 to 2000, as Moriarty's diversified and expanded its range of enterprises.

In recent years, the burgeoning alternative energy market provided another direction and the company became the largest windfarm contractor in the country and has also completed a number of contracts abroad.

Denis suffered a number of health setbacks in later years but none of these prevented him from dealing with every challenge that had to be met on the farm or in the business.

He always had a great love of sport and closely followed the fortunes of his boyhood team, Annascaul. It was with great pride that the family placed an Annascaul jersey, presented by the club, on his coffin.

Denis also had great faith and was well known to the community in the Dominican Church at Holy Cross in Tralee, where he attended 8am Mass every Sunday. His funeral was attended by thousands and many re-told acts of kindness Denis had done for them and various clubs and organisations down through the years to his family.

He leaves his wife Eileen, children Sheila, Aileen, John, Denis, Maurice, Margaret, grandchildren, sister Margaret, sons-inlaw, daughters-in-law, sister-inlaw, nephews, nieces, relatives and many friends. He was predeceased by his brother Jackie. Denis was brought from the Gleasure Funeral Home to the Church of the Purification, Churchill, for Requiem Mass on Monday, March 5th.

He was laid to rest the following day at Realt na Mara New Cemetery, Churchill, after midday Mass. He will be missed by the business and farming community in Kerry, by a large circle of friends, but especially his loving family who will miss him dearly.